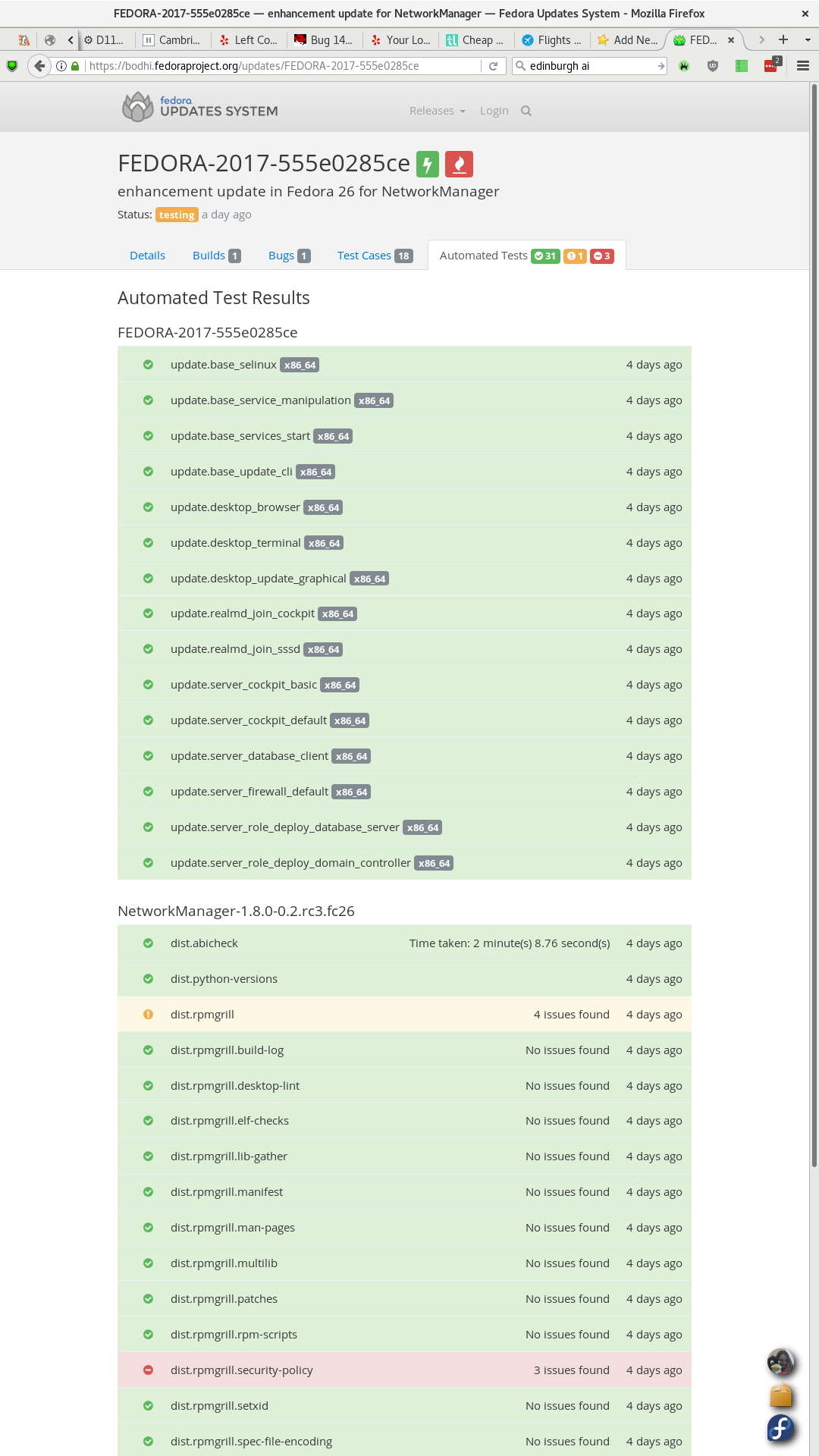 Several weeks ago now, I adapted Fedora’s openQA to run an appropriate subset of tests on critical path updates. We originally set up our openQA deployment strictly to run tests at the distribution compose level, but I noticed that most of the post-install tests would actually also be quite useful things to test for critical path updates, too.

First, I set up a slightly different openQA workflow that starts from an existing disk image of a clean installed system, downloads the packages from a given update, sets up a local repository containing the packages, and runs dnf -y update before going ahead with the main part of the test.

Then, I adapted our openQA scheduler to trigger this workflow whenever a critical path update is submitted or edited, and forward the results to ResultsDB.

All of this went into production a few weeks ago, and the tests have been run on every critical path update since then. But there was a big piece missing: making the information easily available to the update submitter (and anyone else interested). So I wanted to make the results visible in Bodhi, alongside the Taskotron results. So I sent a patch for Bodhi, and the new Bodhi release with that change included was deployed to production today.

The last two Bodhi releases actually make some other great improvements to the display of automated test results, thanks to Ryan Lerch and Randy Barlow. The results are actually retrieved from ResultsDB by client-side Javascript every time someone views an update. Previously, this was done quite inefficiently and the results were shown at the top of the main update page, which meant they would show up piecemeal for several seconds after the page had mostly loaded, which was rather annoying especially for large updates.

Now the results are retrieved in a much more efficient manner and shown on a separate tab, where a count of the results is displayed once they’ve all been retrieved.

So with Bodhi 2.6, you should have a much more pleasant experience viewing automated test results in Bodhi’s web UI – and for critical path updates, you’ll now see results from openQA functional testing as well as Taskotron tests!

So if any of these fail for a critical path update, you should be able to see it. You can click any of the results to see the openQA webUI view of the test.

At present you cannot request a re-run of a single test. We’re thinking about mechanisms for allowing this at present. You can cause the entire set of openQA tests to be run again by editing the update: you don’t have to add or remove any builds, any kind of edit (just change a character in the description) will do.

If you need help interpreting any openQA test results, please ask on the test@ mailing list or drop by #fedora-qa . Myself or garretraziel should be available there most of the time.

Please do send along any thoughts, questions, suggestions or complaints to test@ or as a comment on this blog post. We’ll certainly be looking to extend and improve this system in future!