I've always thought it'd be kinda cool to be able to run Fedora on a tablet. There are some others who'd like this too, and we've had the 'Fedora Mini' and 'Fedora Mobility' sub-projects sort of targeting this in the past, but we never really quite got there. I call this mythical tablet on which Fedora works well 'the Fedlet'. We still haven't quite got there...but there are some interesting new possibilities arising. There's a new Intel platform commonly referred to as 'Bay Trail'. It's basically a very low power Atom CPU with a chipset and GPU all optimized for low power consumption, aimed at tablet use. It's a proper x86 CPU and, in contrast to earlier low-power Intel platforms, it uses Intel's own graphics architecture, not a nasty PowerVR chip (remember those things?) This means it's at least theoretically feasible that Bay View-based systems could be viable targets to run mainstream Linux distros on. In the last month or two, Bay Trail-based systems have started showing up in the market (all pre-loaded with Windows 8.1). One that a lot of people seem to be playing with is the Asus T100 - Phoronix took a shot at it, this guy kinda got it working, and there's discussion on XDA. But that's not the only one out there. There's also a crop of 8" tablets: the Toshiba Encore, the Lenovo Miix 2, and the Dell Venue 8 Pro. I read a review of the Venue 8 Pro a few days ago and was intrigued, and did a bit of research. Today I happened to notice that my local Best Buy had it in stock. So, pretty impulsively, I bought one. I've spent this afternoon trying to boot Fedora on it. Executive summary: it doesn't really work. But it's interestingly close. The first and biggest bear trap with, as far as I can tell, all the Bay Trail-based hardware available so far is that they use 32-bit UEFI firmwares. Yes, they didn't listen to Matthew. (I've checked; he's weeping over a bottle of gin, like he does every day of the week with a 'y' in it.) Up till now the only other systems with 32-bit UEFI firmwares are some very old Macs, and Fedora has had a policy of just not doing UEFI on 32-bit at all. We're now going to have to change that, but it'll take time (the plan is to set things up so a 32-bit UEFI grub2 can boot a 64-bit kernel, and ship images with a 32-bit bootloader but 64-bit system, AIUI). In the mean time, I have hacked it up very very dirtily myself, by whacking on livecd-tools with a hammer until it did something that appears to work. I cut shim out of the loop entirely and just convinced it to create 32-bit live images with an EFI bootloader included; this involves editing livecd-tools' live.py, taking out a check for shim, dropping the shim files and switching up a couple of file names, more or less. After I got that working, with a bit of trial and error, I had images that I can actually boot in the Venue 8 Pro. So that's pretty cool. The V8P (and also the Miix2, I believe) only has a single micro-USB port and doesn't appear to be able to boot from a micro SD card, so you need a USB OTG converter (which is a full-size USB female port on one end and a micro-USB male connector on the other end) to boot from a USB stick. I write my hacked-up live image to the USB stick with livecd-iso-to-disk --format --reset-mbr --efi , plug it into the OTG adapter, plug that into the tablet, press the power button and hold down the 'volume down' key for a couple of seconds (this is how you get into the firmware), go to the Boot tab, disable Secure Boot, and promote the USB stick to #1 in the boot order. Then I quit the firmware interface and it goes ahead and boots the stick. Glorious success!... ...well, not really. I haven't yet hit on an image that will make it to a graphical desktop, or even a console. I've built images with kernels 3.13.0-0.rc1.git0.1.fc21 and 3.12.1-2.fc21 (from rawhide-nodebug) so far. With the 3.12 kernel and default settings it actually boots all the way into GNOME, but the display is very garbled; it looks like modesetting doesn't quite work right for the system, picks the wrong output mode or something. With the 3.13 kernel and default settings, the screen just goes completely blank as soon as modesetting kicks in. If I edit the grub.cfg to pass 'nomodeset' and boot either kernel, it hits a kernel trace quite a long way into the boot process, but before making it either to X or to a console (if I try runlevel 3). I'm trying an image with kernel 3.11 right now, but I doubt that'll help. I guess I'll start bugging kernel people with reports tomorrow. I'll need to pick up a USB hub so I can have both the USB stick and a keyboard plugged in at the same time, too. Still, I'm kinda optimistic that I might be able to get something that actually works quite soon, if I can find people to fix the kernel issues. It looks like it's pretty close to working. Then we'll see just how much GNOME 3 is built for tablets ;) As a piece of hardware, it's pretty nice - unlike previous generation Intel-based tablets, which felt a lot like early lab prototypes which someone had accidentally released into the wild, it seems credible. It's light and thin and has a decent screen and doesn't have any heat issues I've heard about. It's exactly the right form factor to fit in my little travel bag I carry around on trips and stuff. So I'm hoping I'll be able to make practical use of it pretty soon. Edit: With kernel 3.11, modesetting is no better, but it boots successfully with 'nomodeset' and gets to a non-garbled X: 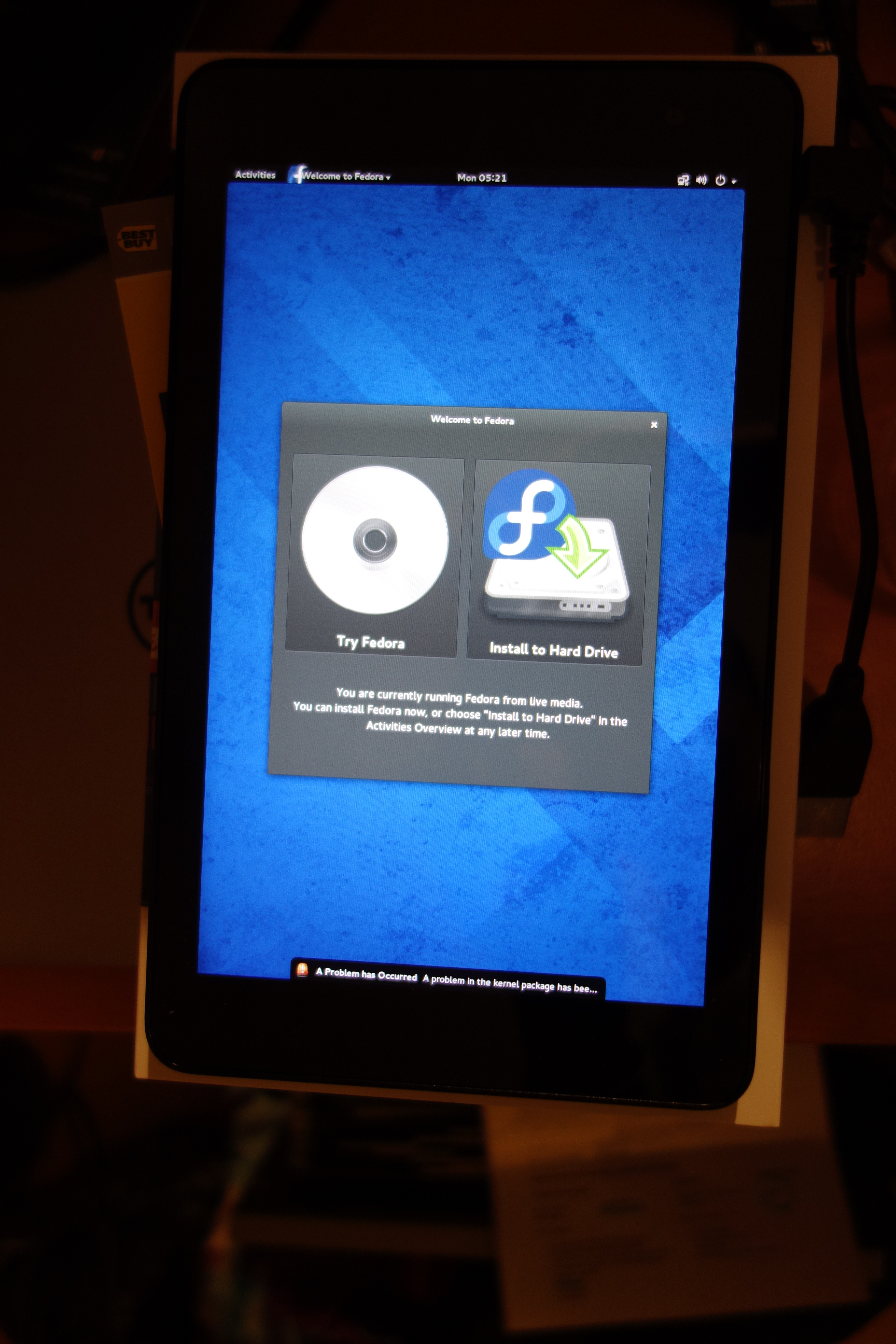 The touchscreen doesn't work, so I can't really do anything until I get a USB hub. But I got something to work with, at least.